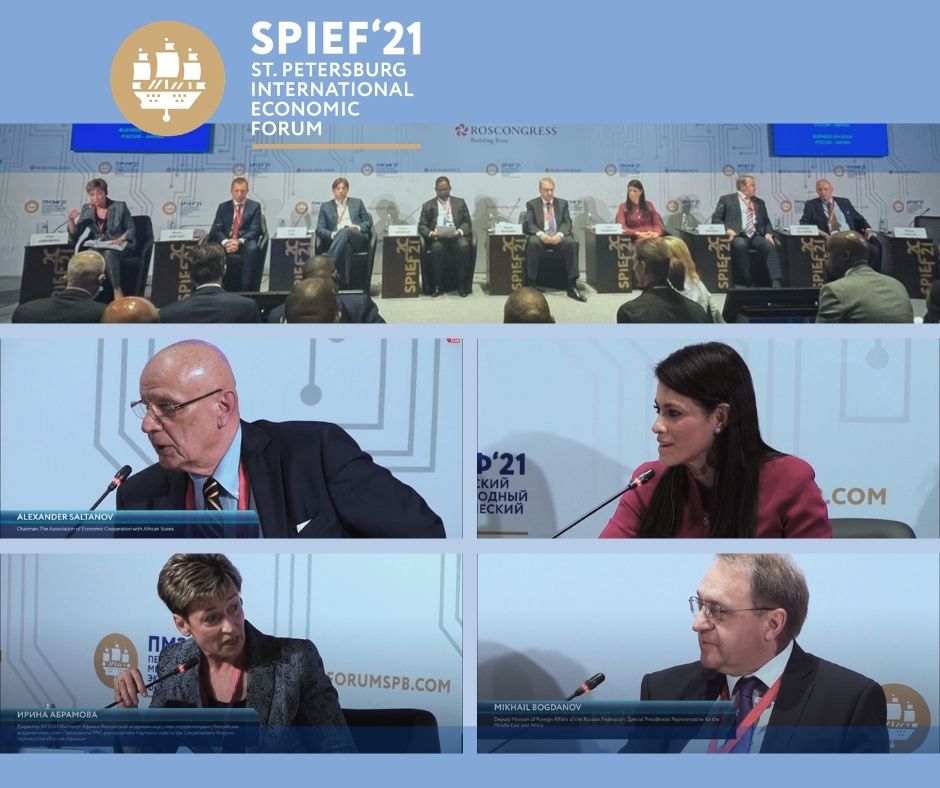 The discussions were attended by high-level speakers such as Prime Minister of the Central African Republic Firmin Ngrebada, Prime Minister of Rwanda Edouard Ngirente, Egyptian Minister of International Cooperation Rania Almashat, Deputy Minister of Foreign Affairs of Russia and Special Representative of the Russian President for the Middle East and Africa Mikhail Bogdanov, Chairman of the Association of Economic Cooperation with African States Alexander Saltanov and others.

Mikhail Bogdanov noted that Russian-African cooperation is gaining new momentum ahead of the second Russia-Africa summit in 2022, and recalled the need to create mechanisms to support Russian business in Africa, citing Russian President Vladimir Putin's message to African heads of state and government on the occasion of Africa Day on 25 May.

“Today we have reached a point where there is a need to intensify our cooperation by creating new fundamental mechanisms to support Russian business in Africa through so-called economic diplomacy, which consists of close cooperation between the Russian Foreign Ministry and line ministries and organizations: Ministry of Industry and Trade, Ministry of Economic Development, chambers of commerce and industry, Russian Export Center, Russian Union of Industrialists and Entrepreneurs, Association of Economic Cooperation with African States, Afrocom.”

Mikhail Bogdanov noted that the Russia-Africa Partnership Forum Secretariat, formed in 2020 on the instruction of the president at the Russian Foreign Ministry, has become “the main body to organize the upcoming Russia-Africa summits, to develop and intensify our friendly and effective bilateral business dialogue with countries of the continent”.
“The Association of Economic Cooperation with African States has also been established, headed by Alexander Saltanov, who for many years was responsible for the Direction of Africa as the Russian Deputy Foreign Minister, and we are very pleased to note that this association now brings together a number of major Russian economic operators with business interests in the African continent,” Bogdanov said.

Alexander Saltanov, Chairman of AECAS, remarked that the issue of the need for state support for our companies is crucial for making a real breakthrough to the African continent.

“In this sense, the idea of creating a Direct Investment Fund is certainly a very urgent task. Without solving it, as quickly as possible, it will be difficult for our businesses to enter markets that are already occupied by competitors… Such an initiative has also been developed within our association, and it is now being considered by government authorities,” he said.

Saltanov also spoke of the need to create representative offices, logistics, and service centers of Russian business in the form of public-private partnerships in several countries or regions of Africa to organize systematic sales of Russian products on the continent.

“We can also use the experience of the Soviet Union to work in Africa — for example, creating a foreign trade company that would coordinate efforts in a particular country or in a particular region of Africa to assemble the products offered by Russian business in the market. One company will probably not be able to cope with this, but when there is some structure working in this direction, it will speed up the process.”

Saltanov said that an essential topic on the Russian-African cooperation agenda was a mutual promotion of information.

“Russian business including regional and big business does not always know what is happening in Africa; and African countries are no longer as aware of Russia as they were of the Soviet Union, they often receive distorted information about our country. It would be extremely useful if a Russia Today tv-channel bureau was opened in some of the African countries. Information exchange in terms of business is also necessary,” he said, recalling that an agreement was signed during the SPIEF to create a Russia-Africa Common Information Space.

“We hope to hold a full-scale presentation of this project in October and offer both a platform and services to promote Russia-Africa economic ties.”

There is a need for targeted training to ensure that the Russian technologies in Africa are sued to their full capacity, Saltanov explained.

“We are therefore, in coordination with the company “Innopraktika” and with the financial support of Gazprombank JSC, implementing a project in the field of education. The aim of the project is to identify the needs and recruit African students studying in Russia for internships in Russian companies operating in African countries. Having just started, we have already received a positive response from a number of major Russian companies working with Africa, such as TMK, KAMAZ, Uralchem, Uralkali, and over 15 Russian universities from different regions,” he said.

Among the panelists from the Russian business community were Kirill Lipa, CEO of Transmashholding, Sergey Pavlov, First Deputy CEO of Russian Railways, and Dmitry Konyaev, Chairman of the Board of Directors of URALCHEM.