Analytics: Russia's Role in the Development of the Agricultural Sector in Algeria and Morocco 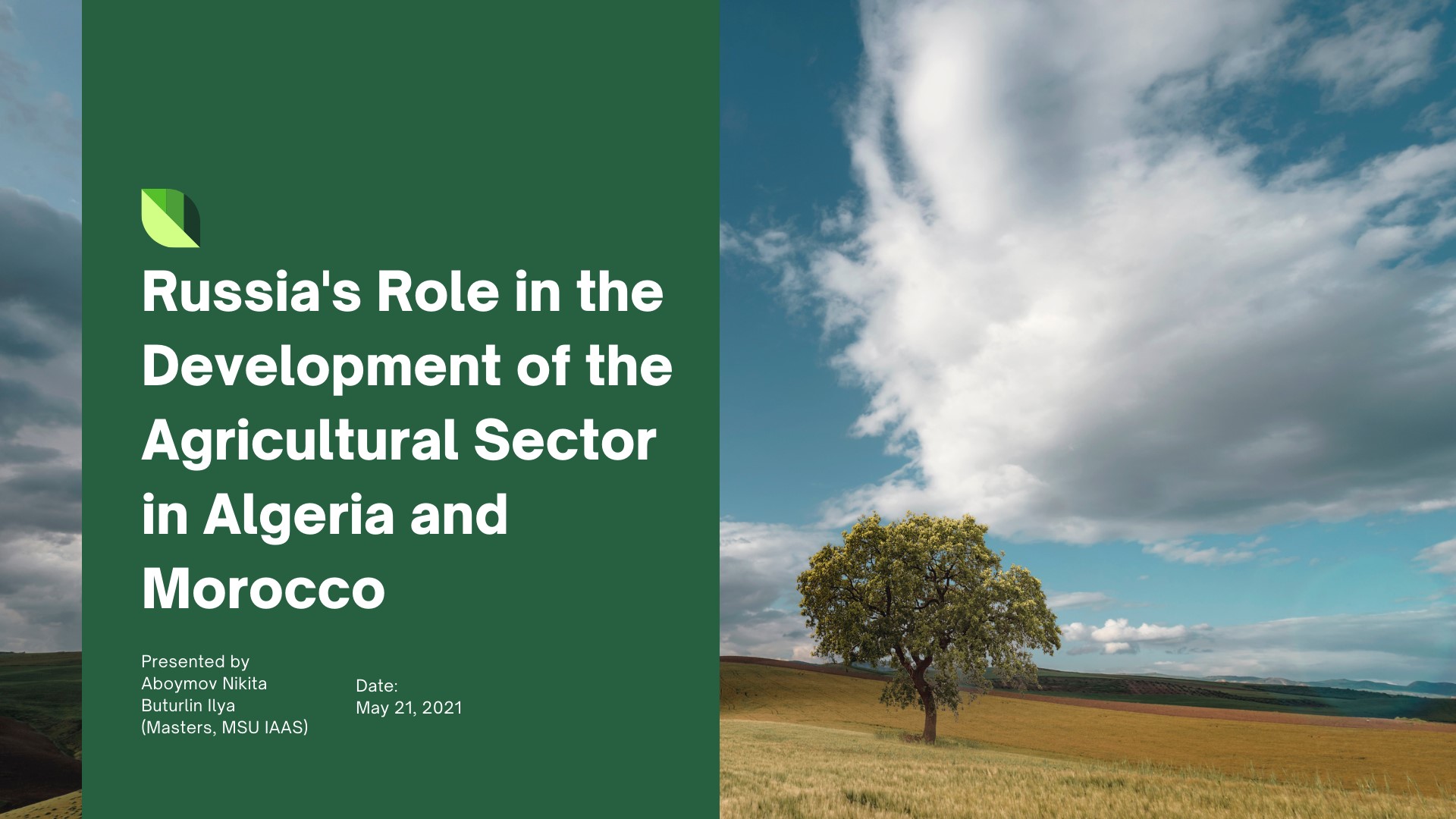 The aim of the study is to answer the question of how big a role Russia plays in the development of the agricultural sector in Morocco and Algeria, which appears to be highly underestimated. Russia has many mutual interests with Morocco and Algeria.
Russia can help Morocco and Algeria to get out of their dependence on the EU in the agricultural sector. Of course, if the Moroccan and Algerian leaders are willing to walk away from the easy, but futile, path of accepting the EU's dominance in their countries' agribusiness.
The way to dramatically increase cooperation with Russia is the hard way, in which Algeria and Morocco will need to give up the “easy money” coming from Europe. But Morocco and Algeria will get real freedom in this way and can solve the problem of food security and intensive economic growth for themselves in deeds, and not just in words.

Key characteristics of Algerian and Moroccan cooperation with Russia: 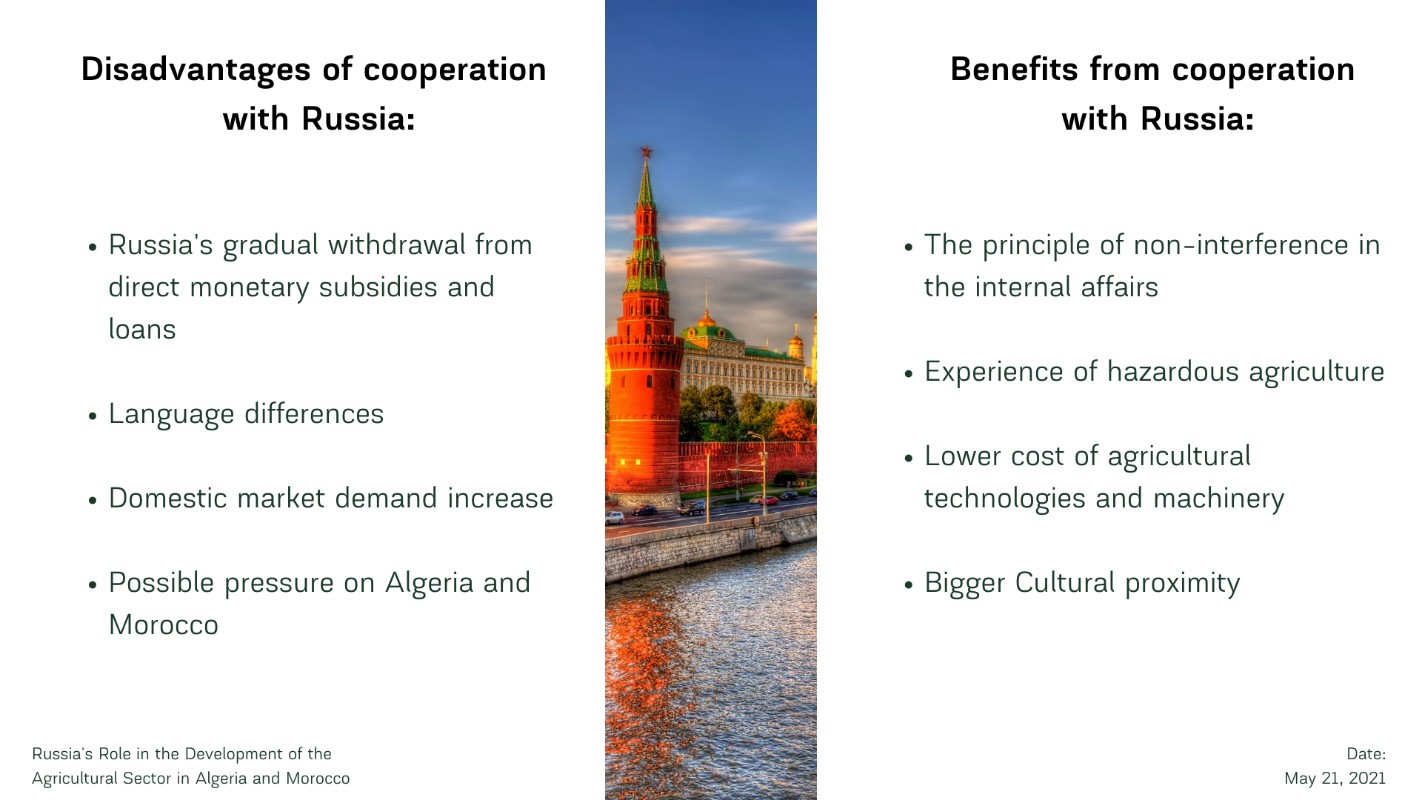 Benefits for Algeria and Morocco:

The principle of non-interference in the internal affairs of other countries strictly followed by Russia (in comparison to Swedish pressure on Morocco in EU, for instance https://wsrw.org/en/archive/4346)

Experience of hazardous agriculture in both the Russian Federation and Morocco and Algeria region.

In both countries there is a significant shortage of natural resources (both fertile soils and water resources). This determines the interest of countries in the use of the most modern and efficient technologies in the field of agriculture primarily from countries with similar difficult natural conditions for farming, like Russia.

Bigger Cultural proximity to a certain extent due to the greater prevalence of Islam in the Russian Federation. The fact that Russia defends the principle of a multiethnic country, while in EU, the situation concerning interethnic relations is not that stable. 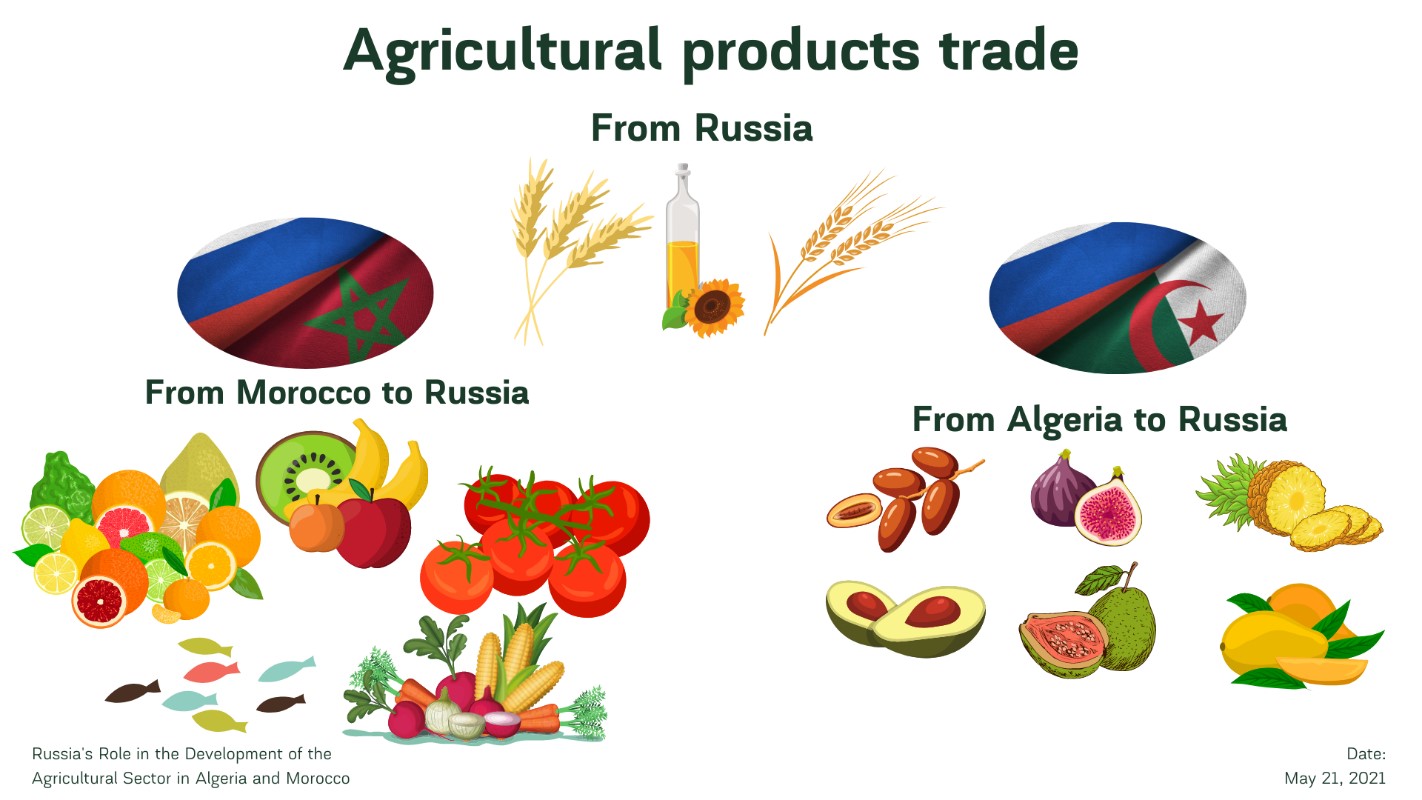 Trade structure of agricultural products from Algeria to Russia in 2019 (dates, figs, pineapples, avocados, guavas, mangoes) and from Morocco to Russia in 2019 (citrus, tomatoes, fruit, fish, vegetables) is combined with the essentially raw nature of the enormous exports of Russian grain and grain derived products to both countries (wheat, sunflower oil, barley).

At the same time, there is a significant interest of Moroccan and Algerian exporters according to the results of online business missions of Agroexport in 2020 - both countries expressed interest in importing Russian agricultural technologies, which are characterized by lower costs compared with traditional Western counterparts. 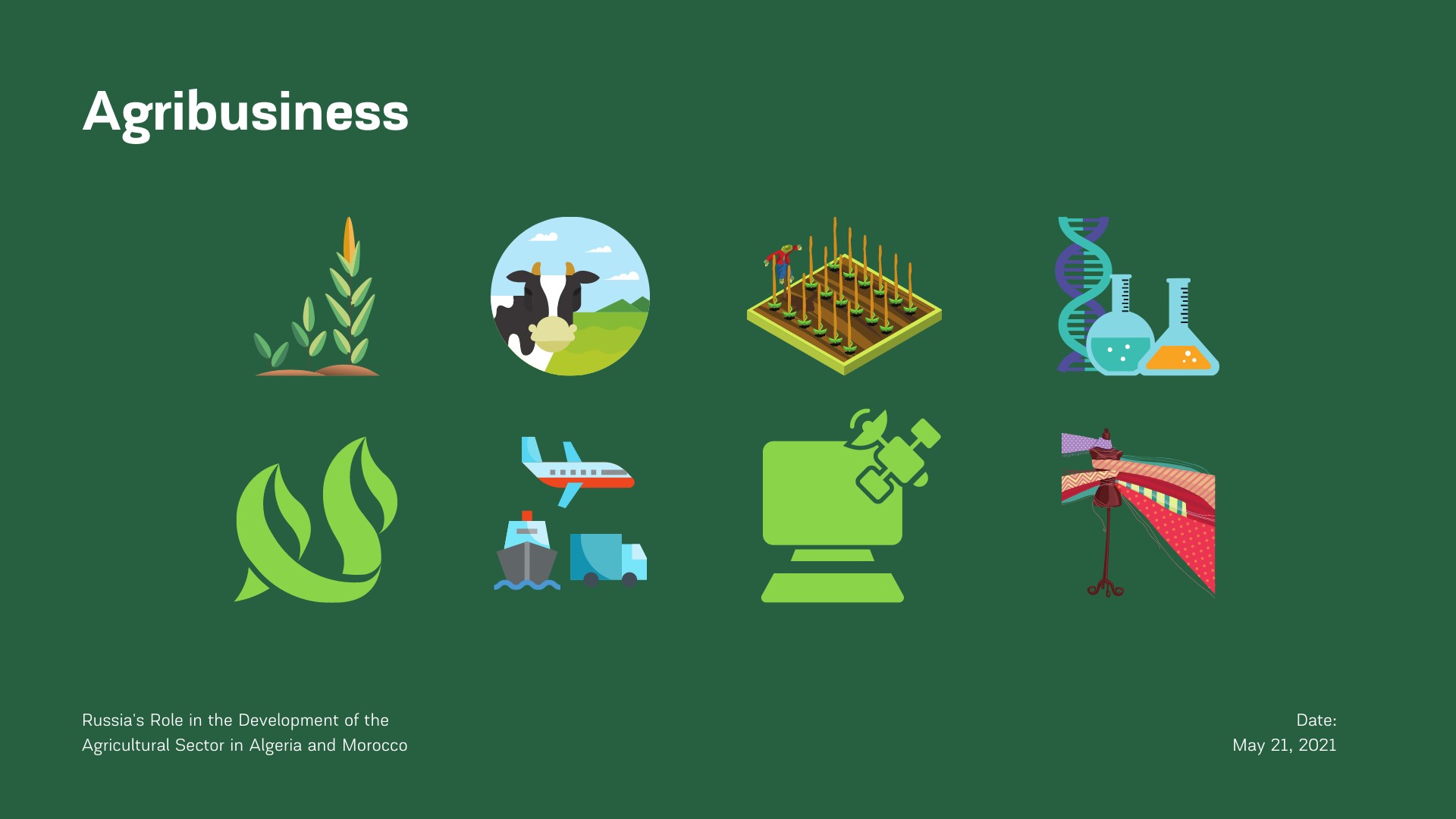 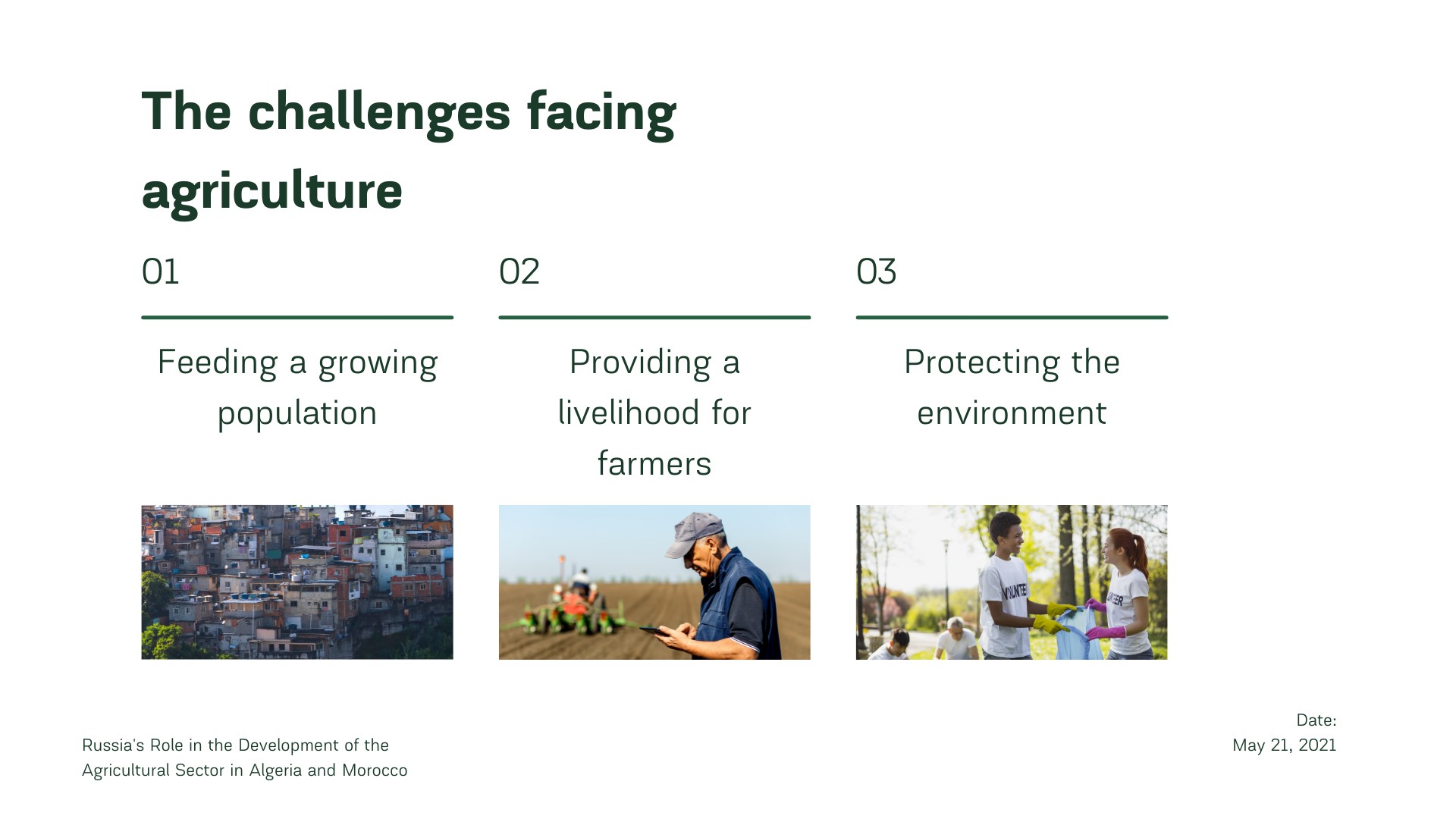 The global food system is expected to provide safe and nutritious food to a population that will likely grow from 7.5 billion people today to nearly 10 billion by 2050.

Not only there will be more mouths to feed, but as incomes grow in emerging and developing economies, so will the demand for meat, fish and dairy.

Providing a livelihood for farmers

The agri-food sector also provides a livelihood for millions of people. Globally, most of the people living in extreme poverty live in rural areas where food production is often the most important economic activity. There are an estimated 570 million farms worldwide today, and millions of other people work in food-related jobs.

The global food system also has a large environmental footprint. In fact, farmlands occupy nearly 40% of the earth’s surface, far more than any other human activity. In addition, irrigation of agricultural crops comprises 70% of global water use, and agriculture directly contributes to around 11% of global greenhouse gas (GHG) emissions (mostly through cattle). Expanding agricultural land can also lead to deforestation, additional GHG emissions and a loss of biodiversity. 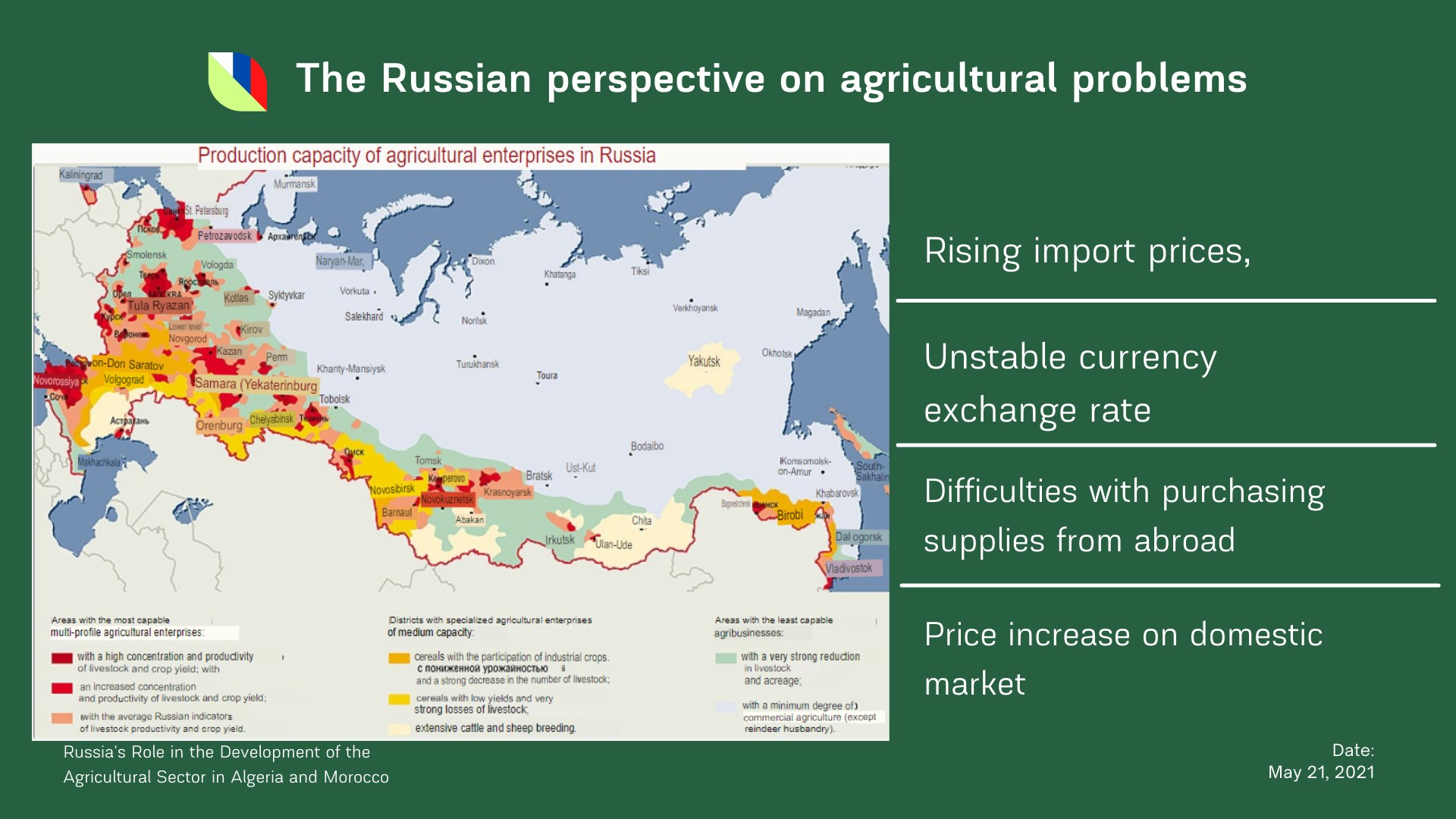 The Russian perspective on agricultural problems.

The Russian Ministry of Agriculture's State Programme for Agricultural Development highlights the following main problems for the development of the agro-industrial complex:

- Problems with supplies from abroad

Since January 2021, Russia's agro-industrial complex has faced the problem of rising prices for essential products on the country's domestic market.
Russian President Vladimir Putin instructed to limit the export of agricultural products in the face of a significant increase in exports in 2020 (and an increase of more than 4% was not prevented even by the pandemic).

Specific historical, cultural and geographical context of the agricultural sector in Algeria and Morocco. 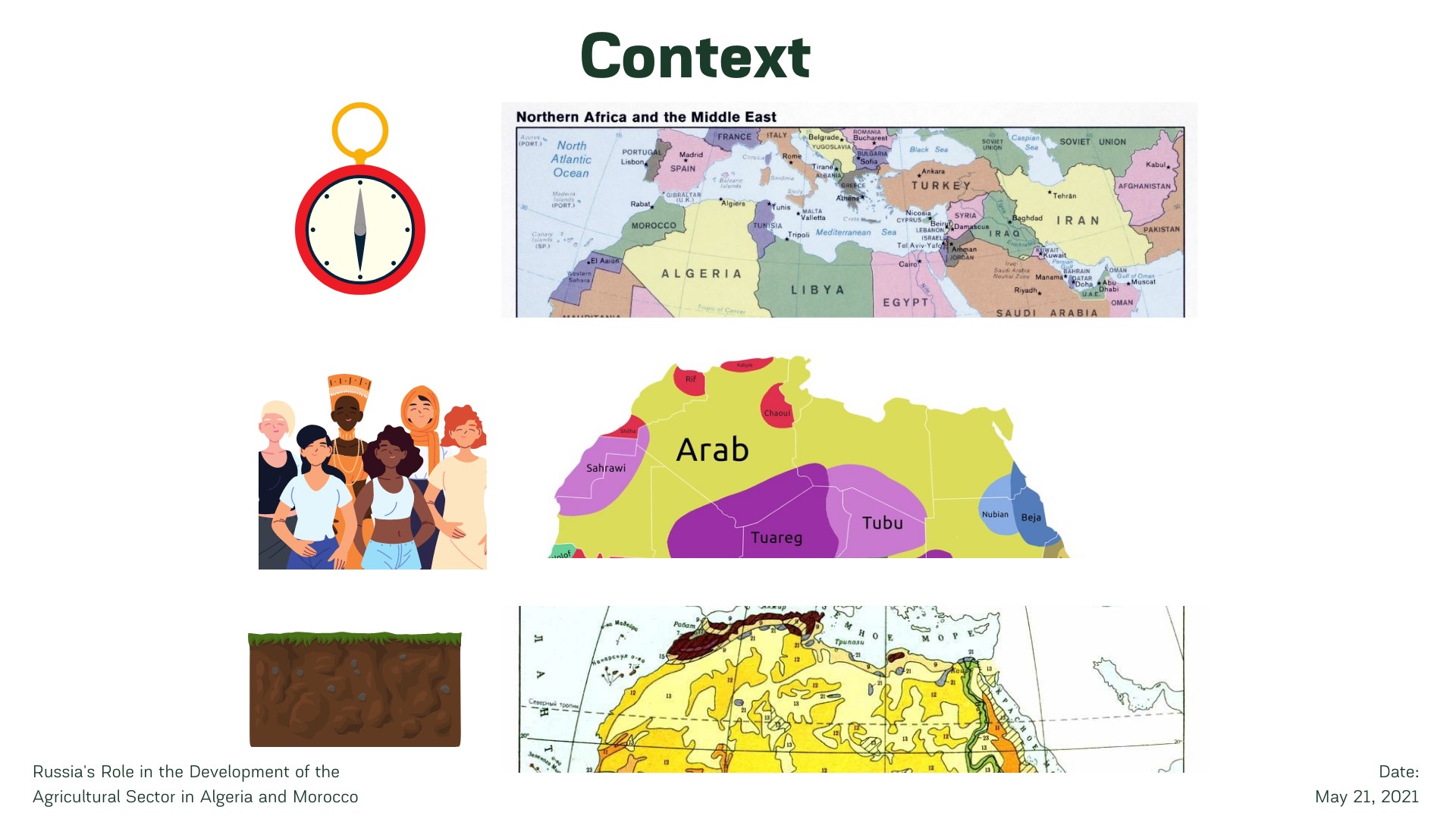 In this respect, Algeria and Morocco share a common history which follows the main milestones for the agricultural sector:

- During the Arab Caliphate, agriculture gradually fell into decline — soil erosion begins, but some grade of development was achieved by organizing production.

- In the case of Algeria, during the Ottoman Caliphate, agriculture declines due to considerable oppression.

- In Morocco, general production was subjugated to the French colonists during the colonial period, which had an extremely negative impact on the country's natural resources.

- Transition to a green economy has become part of sustainable development strategies in Maghreb. In 2008, Morocco adopted its Green Morocco Plan and earlier, in 2000, Algeria adopted the National Agricultural Development Program (PNDA).

As a result of development programmes, which generally focused on overcoming natural disadvantages and developing agro-industrial independence in Algeria and Morocco, both countries had a choice between two potential partners: the EU and Russia.

The proposals submitted in the article reflect a personal opinion of the authors and do not constitute an official position of the association.